According to Decree-Law 102-D/20201 (General Regime for Waste Management), the responsibility for waste management, including the respective costs, lies with the initial waste producer*. They must also, in accordance with the principles of the waste hierarchy and of the protection of human health and the environment, ensure the treatment of the waste, and to this end may resort, depending on the type of waste

According to the legislation, there are several types of waste divided into two major groups, namely non-hazardous waste and hazardous waste.

* “Waste producer” means any natural or legal person whose activity produces waste, i.e. an initial waste producer, or who carries out pre-processing, mixing or other operations that change the nature or composition of this waste (according to article 3.1.v) of Decree-Law 102-D/2020)”.

At UTAD, a municipal or multimunicipal waste collection and/or treatment system is used for the collection of undifferentiated waste. Selective waste (paper, plastic, glass, electrical and electronic equipment, among others) is collected by licensed companies for subsequent recovery.

CURIOSITIES: Did you know that the Compal type juice caps and the beer bottle caps must follow along with the glass bottles to the green ecoponto? Sociedade Ponto Verde has defined when caps that appear to be less than 5 centimeters in diameter are considered small, so they go together with the bottles to the green recycling bin (https://recicla.pt/abc-da-reciclagem/o-que-fazer-com-as-tampas-no-que-toca-a-reciclagem/ [PT])2.

How do you recycle paper coffee cups? The paper coffee cup should be placed in the yellow ecoponto. As cardboard is an absorbent material, the cup has a plastic film that waterproofs its interior, so it should be placed in the yellow ecoponto. This material is separated and sent for recycling. If you received another answer about this material, it may be that in some areas of the country this practice is not yet implemented, since this is a material whose consumption has increased a lot recently and for which there is no easy sorting solution (https://linhadareciclagem.pt/perguntas-frequentes/seccao/perguntas-frequentes-reciclagem [PT])3. Electron  The separation process of waste electrical and electronic equipment should be treated according to the administrative procedure of UTAD’s material disposal via GesDoc. The lamps are included in this waste stream. After the administrative procedure of disposal, the waste is placed in a Ponto Eletrão or forwarded to the managing entity of WEEE with the scope of licensing in this area. 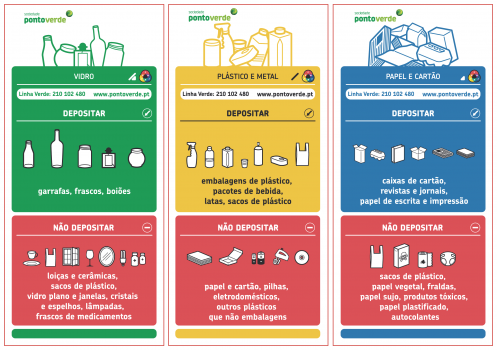 Being identified based on their properties and on the classification criteria established by law, they are produced in various sectors and activities, and given their nature, their correct management must be ensured.

The proper packaging of hazardous waste is divided into several phases. One of them involves placing the waste in the respective plastic bag, placed in an appropriate container, according to the group and associated hazardousness, in the place where it is produced.

In accordance with the provisions of dispatch no. 242/965, the bags to be used for packaging hazardous hospital waste are white in the case of group III waste – Biological Hazardous Hospital Waste or red in the case of group IV waste – Specific Risk Hazardous Hospital Waste, with the exception of non-drilling waste, which must be conditioned in specific non-drilling containers.

Hospital waste is identified according to its hazardousness and LER code (see Waste Classification Guide [PT]6) and separated into four major groups: